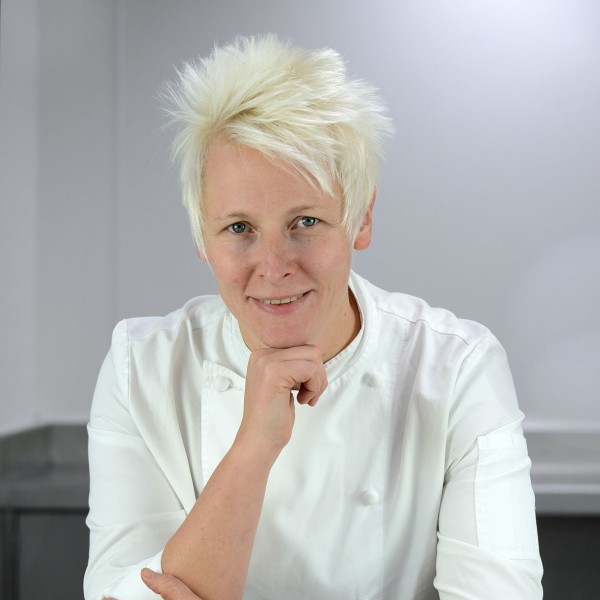 Lisa Goodwin-Allen is one of the most innovative and exciting chefs in the UK today. Leading the kitchen brigade at Michelin Starred restaurant Northcote since the age of 23, Lisa’s impressive culinary skills have landed her regular TV appearances.  She is a regular guest on James Martin’s Saturday Morning, and has judged and mentored on both MasterChef: The Professionals and Celebrity MasterChef but is perhaps best known as one of the veteran judges on BBC1’s Great British Menu.

Lisa Goodwin-Allen is one of the most innovative and exciting chefs in the UK today. Leading the kitchen brigade at Michelin Starred restaurant Northcote since the age of 23, Lisa’s impressive culinary skills have landed her regular TV appearances.  She is a regular guest on James Martin’s Saturday Morning, and has judged and mentored on both MasterChef: The Professionals and Celebrity MasterChef but is perhaps best known as one of the veteran judges on BBC1’s Great British Menu.

In 2020, Lisa was one of a handful of veteran judges to star on the Great British Menu Christmas Special; creating dishes for a unique banquet honouring the NHS and key workers who played such a central role in the Coronavirus pandemic. Lisa’s beautiful, nostalgic and festive flavours won her three banquet courses; more than any other chef has won in any GBM series.  She also served her dish of rabbit & leek turnover to Prince Charles at a banquet celebrating the National Trust and was the first female chef ever to win on the show

In 2019, Lisa starred in Channel 4’s popular new series Snackmasters which saw her competing against chef Claude Bosi. The pair went head to head with the challenge of recreating the famous Burger King Whopper and fries. The panel, including Burger King bosses, judged Lisa’s burger as closest to the original flavour of the iconic meal, with Lisa being crowned Burger Queen.

Lisa can also be seen on James Martin’s Great British Adventure from 2019 when Lancastrian Lisa showed the Yorkshireman what culinary treats the county has to offer and on James Martin’s Islands to Highlands when the pair visited the Isle of Man ahead of the world-famous TT races.

Along with retaining Northcote’s Michelin Star, Lisa has gained many other industry accolades and achievements through her cooking such as The Catey’s Hotel Chef of the Year (2019), Craft Guild of Chefs Restaurant Chef (2011), Member of the Royal Academy of Culinary Arts and has been shortlisted for the AA Chef’s Chef of the Year (2019).

Supporting good causes is hugely important to Lisa. Her work with charities which care for young people like Blackburn Youth Zone, Lakeside Project, Children of the Mountain and CSSG (Creative Services Support Group) demonstrates her passion for empowering young people to fulfil their potential. She also visits local schools, showing children the basics of cooking, and is an ambassador for the School’s Game Changer Project and Springboard’s FutureChef, an initiative aimed at encouraging young people aged 12 – 16 to cook.

At the start of the Coronavirus lockdown in March 2020, Lisa led the kitchen brigade as they prepared food boxes from Northcote’s surplus kitchen stock to donate to local charities and good causes. Lisa personally delivered some of these to hospitals and care facilities nearby.

Supporting initiatives within the industry is also paramount to Lisa. She regularly supports Hospitality Action who provide support services to help hospitality people back on their feet again after a setback and in 2021, Lisa contributed to the Chefs at Home charity cookbook in support of the charity, as well as cooking at key events in their calendar.

Her roles as Chef Ambassador for the British Association of Shooting and Conservation (BASC) and Ambassador for Slow Food in the UK and Taste Lancashire gives her the platform to promote all that’s good about the hospitality industry and helps to inspire future generations.