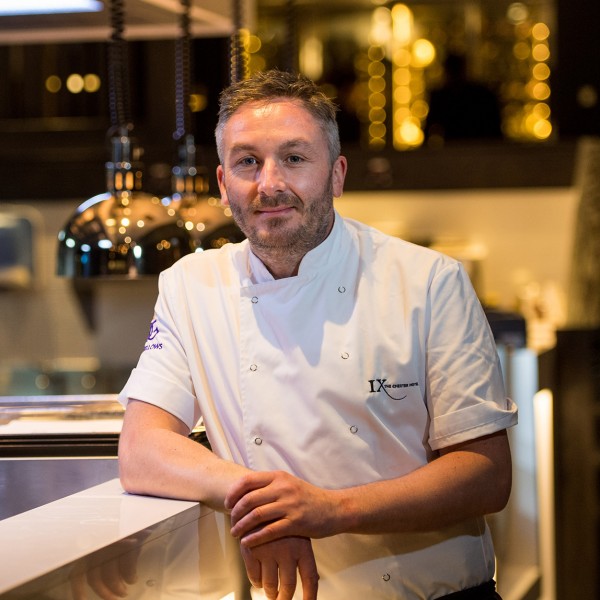 The Chester Hotel’s vibrant fine dining restaurant in Aberdeen is headed up by talented executive chef Kevin Dalgleish. Classically trained at The Savoy in London and triple AA Rosette-awarded, Kevin comes with over 20 years’ experience as a chef and restaurant consultant. His creative use of seasonal ingredients combined with his elegant, simple cooking style is a defining element of each menu. He has handpicked his Scottish suppliers which include Campbells, JK Fine Foods, Donaldson of Orkney, Burnside Farm and St Brides Farm.

As the man in charge of a busy hotel kitchen, executive chef Kevin Dalgleish is used to living life at a frantic pace. Ensuring his team creates plate after plate of perfectly cooked and exquisitely presented food demands long days – and long nights too.

He brought nearly 20 years’ experience as a chef and restaurant consultant when he joined The Chester Hotel.

His career started after he gained a weekend job at a hotel in Hawick, where he met chef Ian Cunningham, who spotted Kevin’s potential and encouraged him to train locally.

Kevin was 19 when he set off for the bright lights of London, his big break saw him securing a job at The Savoy, where he worked under some of the country’s most talented chefs.

It was an incredible experience, exposing the physical and mental demands of working at arduous levels expected at a five-star hotel.

His experience in London showed how many raw ingredients – everything from meat to seafood – came from Scotland and how that was the Scottish provenance was the hallmark for a product being the best quality possible.

He was lured back home to Scotland with a promoted post at a hotel in Troon, before heading up the team at Ackergill Tower – then a luxurious private hire venue - in the Highlands. During his 10 years there, Kevin was required to cook for VIP guests from US presidents to chairmen of multi-billion dollar corporations.

It was the opportunity to create something from the ground up that made him decide to join the team at The Chester Hotel as it prepared to open its doors in 2014. He has put his own stamp on the boutique venue’s dining experience, focusing on local, seasonal produce of the highest quality.

Scottish produce features at the heart of his menus; he takes time with local suppliers to get the right ingredients to serve to lovers of fine food.

The hotel’s IX Restaurant is a fine dining establishment which continues to push culinary boundaries in the north east of Scotland both in the main restaurant and in modern private dining rooms.

In 2017, The Chester Hotel became the only property in the city to be awarded a four-star silver rating from the AA.

Kevin And His Team

Kevin Dalgleish and his team are looking forward to the return of Scotland’s only fine dining festival at The Chester Hotel. They will be working alongside with some of the country’s finest chefs to serve up mouth-watering menus to gastronomes.